Understood as a more comprehensive approach to low-emissions development than jurisdictional-scale accounting for REDD+, the Jurisdictional Approach (JA) was seen as a way to address challenges faced by early efforts to implement corporate commitments to deforestation-free supply chains. JA initiatives sought to align government-led, multistakeholder processes within provinces and districts with prospective external incentives for jurisdictional-scale performance.

Over the past several years, the community of JA proponents and practitioners had grown rapidly and coalesced around a common understanding of what the approach entails. Credible, locally led JA initiatives were underway with international support in at least a dozen provinces and districts, and a national platform had been established to link districts that had committed to sustainability. Those initiatives were accompanied by active discourses on proposals for fiscal transfers and preferential market access to provide incentives for improved jurisdictional-scale performance based on indicators such as reduced deforestation.

While it is too early to assess the ability of JA to generate significant results, practitioners have identified a number of constraints. Those include still-limited material incentives for change compared to the factors that drive businessas-usual deforestation, limited availability of spatial data for better land-use planning, low capacity of district-level officials, and misalignment of government policies between subnational and national entities and across ministries. In order to adequately test the JA theory of change, greater emphasis on creating external incentives and linking JA initiatives across jurisdictions and scales is needed to complement the facilitation of activities within individual provinces and districts. 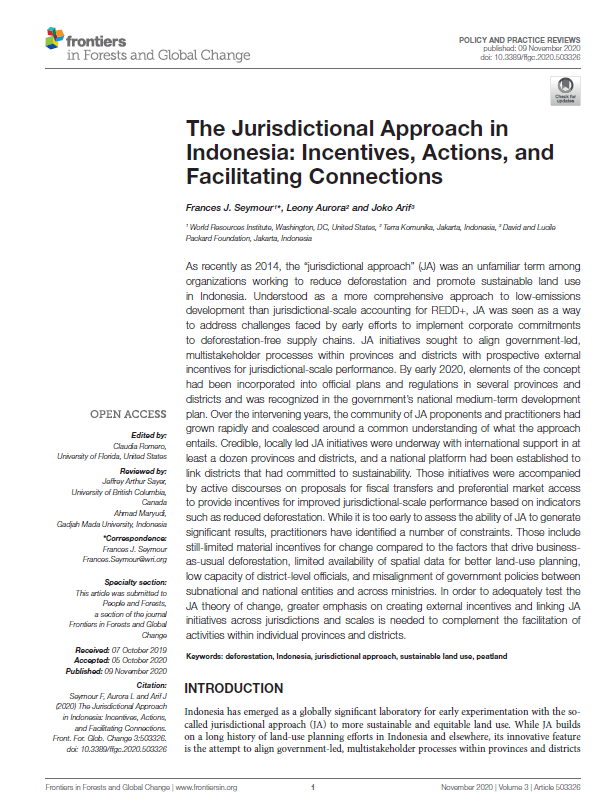