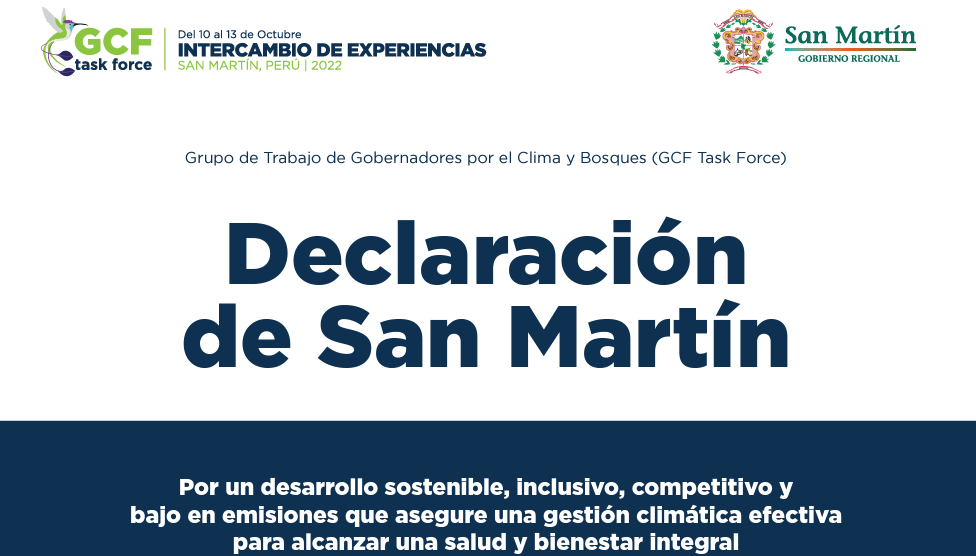 San Martin Declaration Signed in Peru to Promote a Sustainable Agenda for Forests, Climate, and the Amazon

San Martin Declaration Signed in Peru to Promote a Sustainable Agenda for Forests, Climate, and the Amazon

Within the framework of the Governors’ Climate and Forests Task Force’s (GCF Task Force) Intercambio de Experiencias that took place in Peru’s San Martin region between October 10th to the 13th, representatives of subnational governments that make up the GCF Task Force network, as well as civil society, Indigenous peoples, religious institutions, and small and medium-sized business organizations endorsed the San Martin Declaration, signed in the city of Moyobamba on October 13, 2022. The ceremony was also attended by Peru’s President, Pedro Castillo, who announced the government’s decision to “openly combat deforestation.”

The San Martin Declaration – an initiative of the Peruvian members to the GCF Task Force – seeks to achieve “sustainable, inclusive, competitive and low-emission development that ensures effective climate management to achieve integral health and well-being,” and in line with the Manaus Action Plan for a New Forest Economy, adopted by the entire GCF Task Force last March in Brazil. The Manaus Action Plan is based on four pillars: people and communities; knowledge, technology, and innovation; finance, investment, and the private sector; and Government and public policy.

President Castillo remarked that faced with this reality, his government has decided to openly combat deforestation with multi-sector actions, with the participation of the three levels of government, the private sector, producers’ associations, and indigenous communities.

Fabiola Muñoz, Peru’s former Minister of Environment and Country Director of the GCF Task Force, indicated that more than 20 years ago San Martin decided to become a green region, with the support of civil society that transcended the regional governments. “This makes the authorities have to commit to this discourse, and this event showcased and allowed consolidation of what the whole region has to offer. You can also see how the regional government has achieved this support in coordination with local governments. There is a multi-stakeholder work in San Martin,” she explained.

Meanwhile, the Governor of San Martin, Pedro Bogarin, highlighted that the event was a turning point, as it will encourage many private companies, institutions, and individuals to carry out or consolidate sustainable ventures. “There is still much to be done, but in 5 or 10 years this work will bear fruit and our region will slowly begin to change colors if these practices that we sow today continue to be cultivated. And an example of this is that the nurseries with more than 16 million plants of various types, worked with municipalities, educational centers, and civil society, have allowed the reforestation of more than 3 million hectares in San Martin,” said the Regional Governor.

“The Declaration of San Martin represents an opportunity to focus the management of the Amazon territory from a climate perspective that ensures the well-being of people, the health of the forests, and the constant provision of ecosystem services, improving competitiveness and promoting local development,” commented Pedro Solano, advisor to the Interfaith Initiative for the Forests of Peru, the facilitating institution of the Declaration.

Mr. Solano also highlighted that the Declaration opens the doors to implementing a Climate Platform within the framework of the Peruvian Amazon Regional Commonwealth, and that this initiative would allow better management of the territory under a climate perspective and the enhancement of the value of the forests, in addition to facilitating the exchange of information and the strengthening of capacities among the Amazon regional governments of our country.